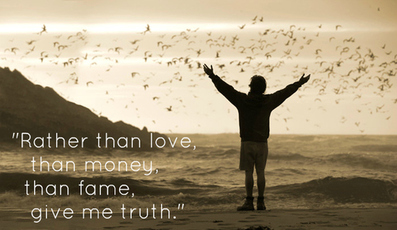 Christopher McCandless' journey into the wild starts in 1990 after he graduates from Emory University. He burns his money, cuts his IDs, leaves his home and changes his name. He leaves because he is not content with his family life. He grew up in a successful family. His parents had a lot of money, but they were unhappy. The family seems to have a wonderful life but on the inside they all are upset. They are like a shiny apple on the outside, but on the inside it is rotting. This displays Thoreau belief about truth being very important. Chris meets many people on his journey.Chris meets many people on his journey. He meets a couple named Rainy and Jan. Jan asks Chris where his parents are. Chris replies saying, "off living their lies somewhere". By that Chris means, his parents lives are all a lie. Chris quotes Thoreau by saying, "Rather than love, than money, than fame, give me truth". We find out later that Chris' parents lied to him about the fact that his father was previously married to another woman. He leaves them because he cannot handle the lies any longer.


Chris exemplifies Thoreau's transcendental belief to "cultivate poverty". Before Chris leaves, his parents offer to buy him a new car and he declines. He does not want it because it is another object. He keeps repeating things, because he does not want any more things. He later on says, "money makes people cautious". He believes that with more money, and things comes more responsibility. He does not want more responsibility so he leaves with only a backpack full of items. He does not have money and has barely any possessions and he really enjoys it. Chris talks about how life was more exciting when he was penniless.


Later on, Chris, Rainy and Jan all go to the beach together. Chris was afraid of water, but he decided to swim with Jan. This embodies Emerson's belief that, "a foolish consistency is the hobgoblin of little minds." Another example of this belief is when Chris meets Mr. Franz. Mr. Franz is an old man who lives his life on a schedule. Chris tells him that all he does is sit on his butt, because of this, Mr. Franz climbs a mountain with Chris. They both are trying new things which makes their life more exciting. Furthermore, Chris writes in his journal what he did differently each day once he reaches Alaska. Being inconsistent expands their minds and is very transcendental.


Furthermore, Chris decides to go to Alaska alone. He wants to rely only on the thoughts in his head. This exemplifies Emerson's idea of self-reliance. He is going to clear his mind and listen to solely himself. He also wants to live off the land and live deliberately. He is living in nature and is a part of nature because of the over-soul. This is much like what Thoreau did when he went to live in the woods. He is "suck[ing] the marrow out of life". Everything Chris is doing is extremely difficult. Everything that is hard is meaningful. Therefore, this whole experience is meaningful and worthwhile because it is not at all easy. Everything he does is transcendental, he is just living and finding himself.