Transcendentalism is most commonly defined as a philosophy that was increasingly conservative as part of the discontent with New England Unitarianism. It was also centered on the idea of God, the individual, and nature all being connected as one (Class notes).

In simpler terms this means that many New Englanders at the time weren’t happy about what was going in the church. These people who soon became known as transcendentalists and they believed that both God and nature were inside of man which translates to the idea that they are all connected. 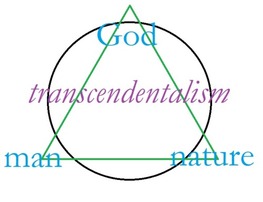 ·         The idea that individual is the most important thing in society

·         Belief in the idea that God, you, and nature are all one
(Class notes)
Take this QUIZ to find out if you live a transcendental life style...
Watch the video above in order to learn in more detail about Transcendentalism and to prepare for the quiz located under the New England  1836-1860 tab.